Although Domantas Sabonis‘ name has frequently surfaced in trade rumors in the last couple months, one executive who spoke to Michael Scotto of HoopsHype said he doesn’t think the Pacers will move Sabonis unless they get a package like the one Orlando got for Nikola Vucevic last season. Chicago gave up two lightly-protected first-round picks and young center Wendell Carter Jr. for Vucevic, and took on Al-Farouq Aminu‘s multiyear contract in the deal.

The price will be significantly lower for other Pacers trade candidates, including Justin Holiday and Jeremy Lamb, who are both available, according to Scotto. Rival executives tell HoopsHype that Indiana is thought to be seeking a couple second-round picks for Holiday.

Scotto doesn’t specify an asking price for Lamb, but I imagine it will be a challenge for the Pacers to get positive value for the veteran wing — he’s having a down year and is earning more than $10MM.

Here are a few more trade rumors from around the Eastern Conference from the latest episode of the HoopsHype Podcast:

During a workout at the Bulls practice facility while rehabbing from a bone bruise in his right knee, Chicago reserve forward Derrick Jones Jr. broke his right index finger, the team has announced.

Chicago adds that Jones will be unavailable for approximately the next six-to-eight weeks. The fractured digit is currently in a splint. Rob Schaefer of NBC Sports Chicago notes that Jones has injured his non-shooting hand.

Jones was two weeks into his recovery from the bone bruise, and had been projected to return in another two-to-four weeks prior to fracturing his finger. In 31 games this season, Jones is averaging fairly modest counting stats of 6.3 PPG and 3.4 RPG across 17.2 MPG for the Bulls. He is also connecting on a career-best 40.5% of his 1.2 three-point attempts per game. The numbers belie the true extent of his impact for Chicago.

His extreme athleticism and 7′ wingspan have made Jones a versatile defender off the bench for the Bulls. The springy 6’5″ forward, still just 24, has emerged as an intriguing small-ball center option for head coach Billy Donovan in certain Chicago lineups.

The injury woes continue for Chicago. Though All-Star shooting guard Zach LaVine and power forward Javonte Green recently returned to the team’s lineup in a 111-110 victory over the Thunder after their own injury absences, several Bulls players remain sidelined with long-term ailments. Guards Lonzo Ball and Alex Caruso just underwent surgeries and will also be unavailable for at least the next six weeks of games. Starting power forward Patrick Williams has missed all but five games this season with a dislocated wrist, and will return at the earliest in April.

Jones and his expiring $9.7MM contract were viewed as favorable trade fodder for the Bulls. Were the Bulls to try to offload a young player on a rookie deal for a veteran upgrade as the NBA nears the February 10 trade deadline, Jones could be used to match salaries. With his fate for the next two months now more bleak, it will be interesting to see how this impacts the roster construction choices of Chicago president Arturas Karnisovas and GM Marc Eversley. Chicago has been hit particularly hard at the point guard and power forward spots.

At 29-17, the Bulls are currently the second seed in the Eastern Conference. Zooming out, the team has gone a mere 3-7 in its last 10 games as the injuries have begun to pile up and is just four games ahead of the 26-22 Hornets, the seventh seed in the East.

There have been expectations the Bulls will do something to improve their frontcourt depth before next month’s trade deadline, but that may be much more difficult due to backcourt injuries, Joe Cowley of the Chicago Sun-Times notes. Long-term injuries to Lonzo Ball and Alex Caruso could alter the Bulls’ plans, since their backcourt trade assets are now depleted.

“We’re thin there now, and we went from really having a deep backcourt – but our backcourt was never really deep this year because we were always dealing with something,” Bulls head coach Billy Donovan said. “It’s been a flux of guys in and out so we were never whole back there. So I haven’t had enough conversations with (executive VP) Arturas (Karnisovas) to really get into any details of what the thought process may be at this point and time.’’

The Suns will be without one of their key rotation players for at least a couple weeks. Cameron Payne will be reevaluated in two weeks after suffering a sprained right wrist, Duane Rankin of the Arizona Republic reports. The reserve guard suffered the injury on Saturday against Indiana.

Payne is averaging 10.5 PPG and 3.6 APG as Chris Paul‘s backup. Elfrid Payton will likely absorb some of his minutes and Devin Booker will see more action at the point.

We have more injury updates:

Caruso suffered the injury in Chicago’s 94-90 loss to Milwaukee on Friday, getting hit by Bucks guard Grayson Allen on a fast break drive. Allen was issued a Flagrant 2 foul on the play and was ejected.

“For Alex to be in the air like that and for him to take him down like that, it could’ve ended his career,” Bulls coach Billy Donovan said as part of a larger quote, according to K.C. Johnson of NBC Sports Chicago (Twitter link). Donovan also noted that Allen “has a history of this.”

In addition to Donovan’s comments, the Bulls have also privately expressed outrage to the league office over the play, ESPN’s Adrian Wojnarowski reports (via Twitter). There’s no word on whether Allen could be suspended for the foul.

Caruso has averaged 8.4 points, 3.9 rebounds and 1.9 steals per game this season and is one of Chicago’s best defenders. The Bulls are already missing several players due to injuries, including Zach LaVine (knee), Lonzo Ball (knee), Patrick Williams (wrist), Javonte Green (adductor) and Derrick Jones Jr. (knee).

The NBA has suspended Bucks guard Grayson Allen for one game without pay as a result of a flagrant foul 2 on Bulls guard Alex Caruso, the league announced on social media (Twitter link). The league deemed the contact on the play to be “unnecessary and excessive.” Allen will serve the suspension on Wednesday, Jan. 26 at Cleveland.

Caruso suffered a fractured wrist as a result of the hard foul and will be sidelined at least six-to-eight weeks. Bulls coach Billy Donovan told reporters, including Darnell Mayberry of The Athletic (via Twitter), that Caruso’s wrist surgery will take place Monday morning.

“For Alex to be in the air like that and for him to take him down like that, it could’ve ended his career,” Donovan said as part of a larger quote, according to K.C. Johnson of NBC Sports Chicago (Twitter link). Donovan also noted that Allen “has a history of this.”

Caruso has averaged 8.4 points, 3.9 rebounds and 1.9 steals per game this season and is one of Chicago’s best defenders. The Bulls are already missing several players due to injuries, including Zach LaVine (knee), Lonzo Ball (knee), Patrick Williams (wrist), Javonte Green (adductor) and Derrick Jones Jr. (knee).

Bucks coach Mike Budenholzer is defending Grayson Allen after he committed a Flagrant 2 foul Friday night that caused Bulls guard Alex Caruso to suffer a fractured wrist, tweets Eric Nehm of The Athletic. Allen has been accused of dirty play since he was in college, and Chicago coach Billy Donovan raised those allegations after Friday’s incident, saying that Allen “has a history of this.”

Bulls head coach Billy Donovan said that Zach LaVine‘s sore left knee has been responding well to treatment and he continues to do on-court work, according to K.C. Johnson of NBC Sports Chicago (Twitter link). Donovan added that there’s still no specific date the team is targeting for LaVine’s return, but is hopeful it could occur “middle-to-late” next week.

The Bulls play Wednesday, Jan. 26 against Toronto, Friday, Jan. 28 at San Antonio, and Sunday, Jan. 30 against Portland, so it’s possible LaVine could return on one of those dates. Assuming things continue to progress in a positive direction, I would imagine the team will be cautious with its star player and would guess Sunday as the most likely outcome, but it all depends on how he’s feeling.

An MRI last Saturday revealed no structural damage to Lavine’s knee, but he had played through soreness for a couple of weeks prior to exiting the team’s loss against Golden State last Friday with “discomfort.” LaVine played less than four minutes in the 42-point loss, but through 38 contests, he still holds stellar averages of 24.9 points, 4.8 rebounds and 4.2 assists this season, shooting 49% from the floor and 41% from deep.

LaVine’s strong play is a major reason why the Bulls are 28-15, tied with Miami for first place in the East. The Bulls have gone 1-2 in LaVine’s absence thus far (1-3 counting the game against Golden State) and face the defending champion Bucks on Friday night.

Chicago has been hit hard by injuries this season. In addition to LaVine, second-year forward Patrick Williams had wrist surgery and is expected to miss most, if not all, of the season, Javonte Green has been dealing with a strained adductor, Derrick Jones Jr. has a bone bruise in his right knee, and Lonzo Ball is undergoing knee surgery next week to repair a torn meniscus, which will sideline him for several weeks. The team also had three games postponed in December due to a COVID-19 outbreak.

JANUARY 21: Bulls head coach Billy Donovan told reporters, including K.C. Johnson and Rob Schaefer of NBC Sports Chicago (Twitter links), that Ball will have surgery next week and will rehab and do strength work in the meantime. Donovan also clarified that Ball is suffering from a bone bruise as well as a torn meniscus, and the six-to-eight week recovery timeline will start once he has the procedure. 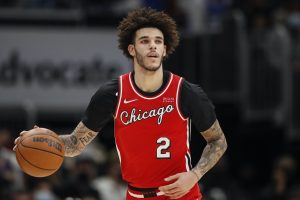 JANUARY 20, 12:48pm: The Bulls have confirmed in a press release that Ball will undergo arthroscopic surgery on his left knee following an “initial period of rest and targeted intervention.” He’s expected to return to action in about six-to-eight weeks, according to the team.

JANUARY 20, 9:43am: Bulls guard Lonzo Ball has been diagnosed with a small meniscus tear in his left knee and is considering his treatment options, reports Shams Charania of The Athletic (Twitter links).

As Charania explains, there’s a possibility that Ball will be able to play through the injury while team doctors keep an eye on his knee, but if that’s not deemed viable, he’ll undergo surgery and would miss several weeks. Ball underwent arthroscopic surgery to address a similar injury in the same knee during July of 2018, K.C. Johnson of NBC Sports Chicago notes (via Twitter).

According to Adrian Wojnarowski of ESPN (Twitter links), the Bulls and Ball are expected to finalize a decision within the next couple days. If he goes under the knife, the 24-year-old would probably be sidelined for about four-to-six weeks, sources tell Wojnarowski.

As we relayed on Wednesday night, head coach Billy Donovan told reporters that the initial treatment plan on Ball’s knee injury was unsuccessful and that team doctors were waiting to see how the knee responded to the new treatment before making any decisions on a course of action and recovery timeline. Ball isn’t accompanying the team on its three-game road trip to Milwaukee (Friday), Orlando (Sunday), and Oklahoma City (Monday).

While Ball’s diagnosis isn’t great news for the Bulls, the team did get Caruso back in its lineup on Wednesday night following a 13-game absence due to foot and hamstring injuries, as well as a stint in the health and safety protocols. Caruso’s role would increase if Ball misses a significant period of time, with Ayo Dosunmu and Coby White also playing important minutes.